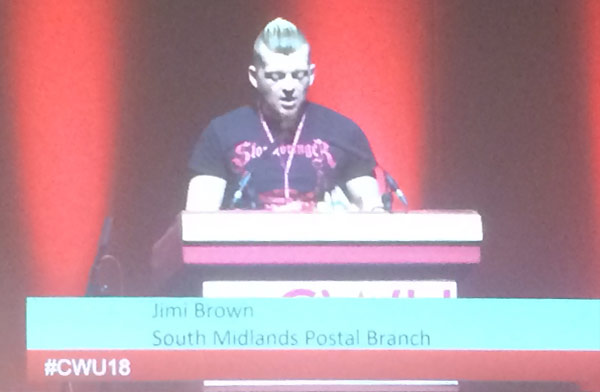 There were two main emergency motions at General Conference one on the Windrush scandal calling for the CWU to take part in defending their rights and secondly that the Government are held to account, a number of representatives spoke out against the hostile environment this Government has caused on their lives.

Both motions were unanimously carried and work will now start on both.

Th Four Pillars agreement is the first of its kind in the trade union movement. 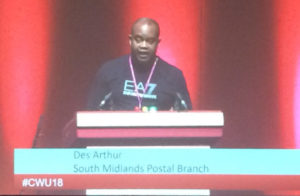 The Four Pillars Agreement was the main emphasis of the Postal Conference with lots of motions being submitted around the new agreement. These ranged from better training for representatives on the conduct code, IR Framework, attendance and any delivery based agreements.

A lot of motions were about how to stop our members being bullied by management and how we deal with these individuals. The National Officers were all onboard with these motions and all were carried, there were plenty of new speakers and as always the South Midlands Postal Branch Delegation got involved in the debate to either to support or oppose motions, a motion to include members of the RMPFS in the new pension scheme was carried which gives all our members the the same pension.

In all CWU Postal Conference 2018 was different from others, this is due to the Four Pillars Agreement and the fact that we are a private company now and that we have achieved this agreement within the private sector. 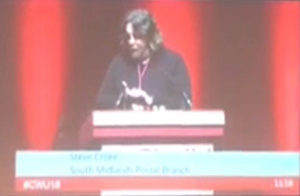 “What we also did was to re-energise this great trade union of ours – and our brand of fighting, workplace trade unionism,” Terry explained, placing our union in the proud tradition of miners and dockers of yesteryear.

It had been right and fitting to celebrate the “massive achievement” of the Four Pillars National Agreement, he continued, but now it was time to “move forward” and consolidate the victory.

“We’ve now got to bottle that Four Pillars spirit and use it to make this agreement work – by organising and engaging with our members.”

There would be more challenges ahead, but with unity and determination, these challenges can be overcome.

This conference is probably the most important in regards to where we are as a union including the re design aspect of the union and what this union will look like in the future.